20 YEARS OF IDEAS IN BAKERY

20 years of activity for a company is always a great goal. In this case, it coincides with a goal achieved: having researched and found the most suitable alchemy to create and give continuity to our "natural science of bread". An apparent oxymoron between science and nature, but since the year of its establishment, it is the way of doing and thinking of Federico Allamprese Manes Rossi and Il Granaio delle Idee.

"Bread is genuine from the very beginning and refuses superstructures that are tied to commercial logic or that aim to upset its natural canons. I learned this little dogma directly, with the experience that matures through mistakes and underestimation".

In 2004 Il Granaio delle Idee was the only licensee in Italy for a two-year period by Walt Disney, to produce “Panino Animato”, an alternative and natural bread snack embellished with Disney cartoons wafers. "Branding bread through one of the most recognized brands in cinema and cartoons has not been enough. Bread has shown me that it actively resists everything that is industrial”.

An important step to invest and increase even more the clean label model, of which Il Granaio delle Idee has been one of the pioneers in this sector. This is how an important in-house Research and Development Laboratory was conceived, set up and strengthened in 2010, where 5 bread scientists now work. The laboratory has studied and developed the best combination and balance between nutrition and wellness in the world of special flours and bread mixes, allowing the company to grow commercially and create different products.

Driven by the frequent consumer requests for foods that can have a significant impact on human wellbeing, Il Granaio delle Idee has launched Pane Funzionale Salus®. Salus is a revolutionary blend of flours with various nutritional benefits: from the limited content of calories and fats, to the high concentration of fibres and proteins, from the low level of carbohydrates and sodium to the presence of oat beta-glucans.

Beta-glucans are fibres present in foods such as oat bran. If taken daily through the equivalent of 150 g of Salus (which contains at least 3 g of beta-glucans), they could reduce cholesterol in the blood.

"We have studied for a long time the world of functional foods, i.e. those that are able to bring benefits for one or more physiological functions and that are able to prevent or reduce the risk of diseases. The result is a bread that is not only tasty and fragrant, but also an ally of well-being with authorized nutritional claims. A product that combines unique and original aromas with nutritional balance. Another important goal achieved in these 20 years of activity".

Not only for this reason, in September 2018 Il Granaio delle Idee will attend the Iba fair, the world's leading exhibition of bakery and pastry products. An essential showcase for internationalizing the “natural science of bread” made in Italy.

Subscribe to our newsletter and stay informed about news, promotions and events every month!

Do you need more information about Pane Funzionale Salus®?

Fill in the dedicated form with your request and you will be contacted as soon as possible.

Enzymes used by Il Granaio delle Idee are the result of an accurate selection, in compliance with current food legislation and in the name of naturalness and quality.
The company is specialized in the use of enzyme technology in the field of bakery improvement.
Our innovative enzyme blends allow us to solve the critical issues typical of the world of baking and pastry, always considered difficult to solve without the use of emulsifiers or raw materials of chemical origin.

In collaboration with our customers, our Research & Development Laboratory studies customized enzymatic improvers to achieve challenging goals and solve their production problems.
Our natural improvers are obtained using non-standardized concentrated enzymes: this allows to obtain highly competitive cost-recepts on the market. Il Granaio delle Idee proposes enzymes with single activities and different concentration levels or customizable on customer request.
Our range includes enzymes of both fungal and bacterial origin, including: Amylases, Lipases, Glucose Oxidases, Hemicellulases, Proteases, Transglutaminases.
Choose the features you want to improve in your bread: we will create for you naturale customized products, with high performance and low cost. 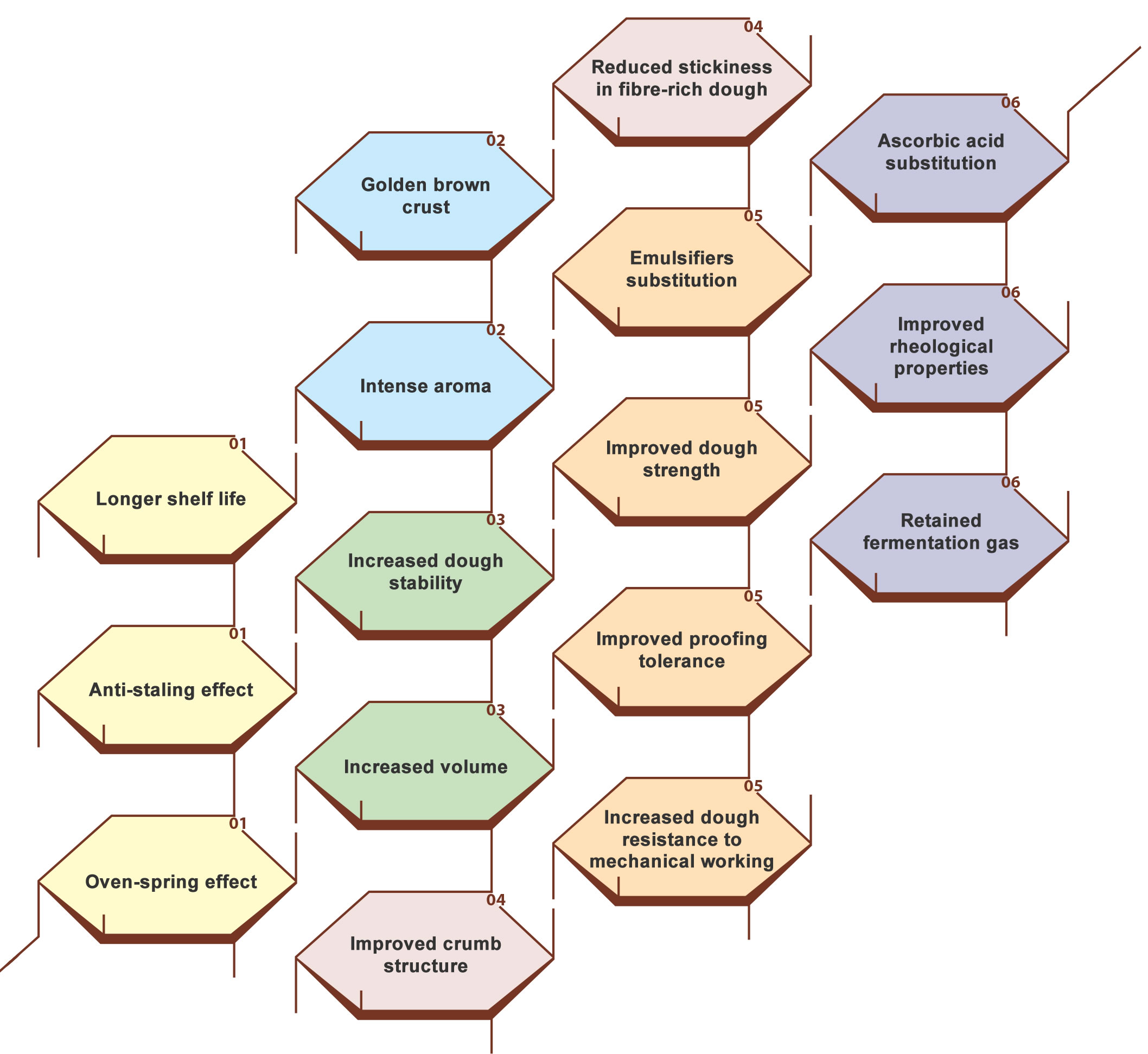